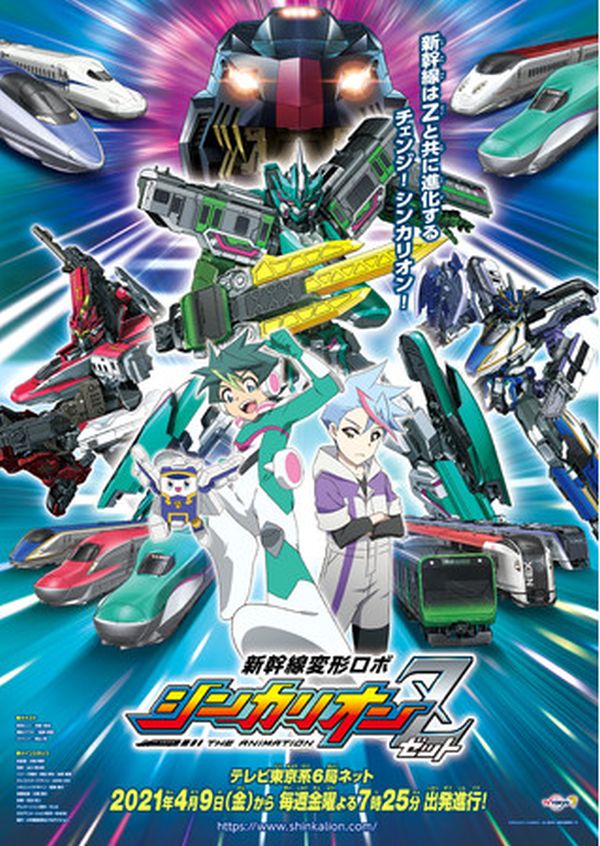 It looks like the entire anime block on Saturday mornings will be dissolved with Zoids also being replaced by a non-anime program: ja.wikipedia.org/wiki/ゾイドワイルド

It looks like a program related to the 2020 Summer Olympics in Tokyo is going to replace Shinkalion: ja.wikipedia.org/wiki/新幹線変形ロボ_シンカリオン What will happen to Zoids' timeslot still is not known.

@ShinkalionE2Thomas: Well there are some examples for two anime by Takara Tomy ending on the same day, most prominently the end of B-Daman and Beast Saga on September 29, 2013 in order to get replaced by Ace of Diamond. Yeah, I've heard about the new season of The Seven Deadly Sins and also think of the possibility that Shinkalion could air until September, which would make it air for 89 episodes. A second season of Zoids also could still happen, as in terms of anime all Zoids generations had two seasons. Another scenario to consider would be that The Seven Deadly Sins takes Shinkalion's slot and Zoids going on with a second season and ultimately getting replaced by another anime by Takara Tomy, or one of the two slots no longer being used for anime.

There hasn't been any source for the name of the second season, all what was known was that a new arc would begin in April and a new arc doesn't count as season in particular if it doesn't have a confirmed name. That's similar to the first series of Inazuma Eleven, which also wasn't divided into named seasons, but rather into arcs. As with the end of Shinkalion it is more likely that it ends in June, as merchandise also can be released after the end of the anime, like it happened with other franchises by Takara Tomy, like Beyblade and Beast Saga. As well Zoids was scheduled to have fifty episodes, with the final episode most likely airing on June 29, 2019. On the same day Episode 76 of Shinkalion will also air, unless there are weeks without a new episode. As well I put a question mark behind 76, meaning that it's likely, but not for sure yet.

A few days ago it was announced that Shinkalion will end in due course. It will likely end in June, obviously coinciding with the end of Zoids Wild, another anime by Takara Tomy and TBS. It is currently not known what will happen to the timeslots of both series, however given the prospect of two anime ending at the same time and no succeeding anime announced to fill the gap at that time, it might happen that TBS' anime block gets dissolved for now. The announcement you find here: excite.co.jp/news/article/E1558131159221

Just saw that Bachigami is from Shinkalion. However, the links to Sailor Moon have to be removed. See this page: myanimelist.net/anime/36531/Shinkansen_Henkei_Robo_Shinkalion_The_Animation

Perhaps Bachigami is from another franchise. We should report Gary to staff or VSTF again. He also made another sock: shinkalion.wikia.com/wiki/User:Kaolinitedrugs

Yeah, I have encountered several users with autism on my wikis. Some of them are even very competent members of the community.

Perhaps he directed the issue back to our wiki, as Gary is already globalled and further action against him is up to the community and its admins. On the Hamtaro article Gary inserted false information about the broadcasting companies and also about character names as seen here: en.wikipedia.org/w/index.php?title=Hamtaro&diff=852105863&oldid=852078444

Yeah. I saw it. He also vandalized the page about Hamtaro on Wikipedia. Perhaps he even has used further IPs, which we didn't find yet.

I also didn't see any OCs there. As well he didn't use an account on Wikipedia, just multiple IPs.

I didn't see any such OCs, or do you mean Wikipedia.

I've just removed the links to Sailor Moon Crystal Wiki. In three months Gary has bothered Kamiwaza Wanda, Shinkalion and Sailor Moon Wiki for a full year. He really doesn't give up fast.

Gary came back with another sock which increased his ban further. On Sailor Moon Crystal he even used two further socks to evade his ban. However, both are globalled now.

Most likely Magic713 will block him there.

His username is Wisemandrugs. He also vandalized Sailor Moon Wiki with this account and is not blocked there yet, which hopefully soon changes. On Wikipedia his latest IP still isn't blocked.

Now Gary made another sock and his edits here didn't contain anything Sailor Moon-related. But this didn't prevent him from being globalled again. Needless to say his latest sock also got blocked here and his parole vote won't start before July 29, 2019.

We only have to block any new account he makes. As well someone could watch all episodes to find out about new characters. From what I know there is even a subbed version of Shinkalion. However posting links to it here is against FANDOM's Terms of Use.