Abuto is a genius engineer who helps the Shinkansen Ultra Evolution Institute with refitting the Shinkalions and building the Zailiners at a young age. However, he doesn't regard himself as a genius, as the blueprints of his "creations" actually come from his father, who has been sending these blueprints, as well as some hints to where the Z Codes are, directly into his head though some unknown method. These hints often take the form of dreams, in which a mysterious Dark Shinkansen also appears.

At the end of Episode 13, he boarded the Dark Shinkansen at Sekigahara Station in order to get clues about his father. When he returned at the next episode, however, he had already become the driver of the Dark Shinkalion and turned against the Ultra Evolution Institute. 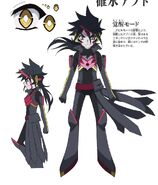