Dark Shinkalion Absolute (ダークシンカリオンアブソリュート) is one of the alternative modes of the Dark Shinkalion. It first appears in Episode 37.

This form was gained after Abuto was freed from Tolerantia, the negative emotions that resulted in using the Dark Shinkalion Devil Mode. After returning to earth, Abuto, with support from Shin Arata and Goichi Shima, convinced Saijō Sogō to let him out on the field to battle a revived Monsterized Wadatsumi in the Dark Shinkalion along with Shin. Although he ran the risk of falling under corruption once more, he was eventually able to overcome it and the Dark Shinkalion assumed its Absolute form, freeing Abuto from its dark influence and finishing off Wadatsumi once and for all.

The outlook of this form is identical to its normal form, but with the color scheme of white, lavender, grayish blue and pink instead of the original black, magenta and gold. 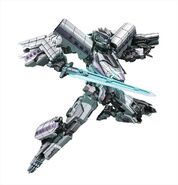 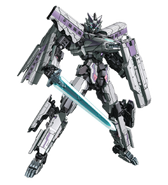