發音未來
Miku Hatsune is a support character of Shinkansen Henkei Robo Shinkalion THE ANIMATION. She first appears in Episode 15. She is voiced by Saki Fujita.

Miku is a 11-year old girl who aspires to become a Shinkalion driver. She has a great aptitude to be a driver, but due to her motion sickness, she claimed herself to be "a failure of a driver”.

At some point between the events in Episode 76 and the movie, she somehow becomes a singer.

Miku is great at both studying and kendo, and loves going to the Hakodate City Seikan Ferry Memorial Museum Mashumaru. She is the driver of Shinkalion H5 Hayabusa. 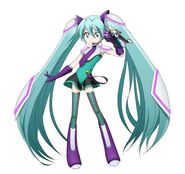 Miku along with the Team Ōmiya members

Miku as a singer in the movie