White and red with red linings

The 800 was built as part of the SUEI's intention on expanding the Shinkalion project to a nationwide scale. With the addition of its young genius driver, Rei Ozora, participated in its development, it became the first ever Shinkalion to be capable of flight.

After the destruction of the Black Shinkalion Ogre, Rei quit as a driver for good and returned to his normal life, with the 800 on standby should another threat arise.

The 800 is equipped with two pairs of wings known as the Double Wing System: The large Swallow Wings on its back allow it to glide through the air for a long time, while the Sub Wings on its legs, shaped like a swallow’s tail, allow it to adjust its position in the air. However, despite being specifically designed for aerial battle, the 800 is still capable of moving on the ground without using its wings under certain circumstances.

Additionally, the 800 is armed with the Pantograph Arrow, a large bow-and-arrow weapon that shoots energized bolts for ranged combat. The Pantograph Arrow can also fire a single supercharged arrow as the deathblow.

The 800 has a sharper nose than that of the 700 series. The livery is white, with a red stripe and roof.

The 800, when transformed, becomes a humanoid mech, which still keeps it's chest the same the nose of it's Shinkansen mode. However, unlike the other Shinkalions, the nose shells of the rear car are placed on its back as the Swallow Wings, rather than folded on the legs. Another set of smaller sub wings are placed on the legs instead. 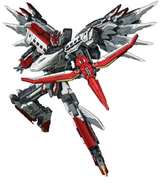 With Pantograph Arrow
Community content is available under CC-BY-SA unless otherwise noted.
Advertisement