One of The Adult Drivers (formerly)

Purple and white with red, orange and yellow linings

The E3 was built as part of the SUEI's intention on expanding the Shinkalion project to a nationwide scale, designed specifically for covering regional combat on Mini-shinkansen lines. It first debuted in Episode 10 when the E6 was facing off alone against the Wild Boar.

In Episode 48, its entire right arm was corroded by Horrid Blossom and thus was unable to dispatch in later episodes before its maintenance was completed in Episode 65. During this time, the E3 Tsubasa Iron Wing took its role as Shinobu’s personal unit.

The E3 has access to the Railway Crossing Shuriken, a large 4-bladed throwing star that can separate into “Kunai Mode” for usage as twin combat claws. This weapon could also be used to launch a rope with grabbing hook, or generating smoke to distract the enemy.

The E3 is one of the SUEI's fastest units, reaching a level of agility that before the introduction of later models was unrivaled by its fellow Shinkalions. The E3 specializes in stealth operations, and as such, it can cloak itself for low visibility. It also has the ability to project holographic clones and energy auras for attacking enemies.

The E3 series trains are built to a smaller loading gauge than mainline Shinkansen trains—the width and length of each car is reduced to fit on the narrower clearances of the "Mini-Shinkansen". Doorway steps fold out to bridge the gap between the narrow body and the platform at regular Shinkansen stations.

The E3 Tsubasa is colored with the new color scheme that most of the E3 sets have been repainted to since Spring 2014 onwards. The new color scheme uses white, evoking the snow of Mount Zaō, dark purple inspired by the Mandarin duck, the prefectural bird for Yamagata Prefecture, together with yellow and red for the safflower, the prefectural flower of Yamagata Prefecture.

The E3, when transformed, becomes a humanoid mech, which still keeps it's chest the same the nose of it's shinkansen mode. 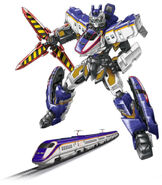