Red (original)
Orange (in the anime)

Due to the original E3 Tsubasa’s right arm being corroded by Horrid Blossom in Epiosde 48, the Iron Wing was forced to be utilized early to take its place in Episode 49.

After the original E3 was fixed, Iron Wing was placed in storage until Seiryu took the wheel in Episode 70 to retrieve his memories. 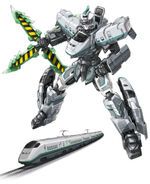 Iron Wing’s appearance in the anime, with Shinobu Tsukiyama as the driver.