During the first of the Giant Monstrous Being outbreaks, the E5 remained in storage as none of The Adult Drivers were compatible. Fortunately, when Hayato snuck into Ōmiya Branch to return a dropped Shinca Card, he accidentally got scanned by Shashot and was found compatible. Since then, much of the Shinkalions were piloted by children until a way for adults to pilot them was found. During the final battle against Kairen, the E5 was replaced by the E5 MkII, and did not see anymore action until Genbu took the wheel during the battle against the Valhallan.

The E5 has access to the Turnstile Sword, which can trap enemies in an energy cage similar to a station gate from a modern era train station. The E5 is also an agile runner, with claws for traction and thrusters in the ankles (and later wings) for high jumps. Unlike the other, later Shinkalions, the E5 requires the pilot to be in interlock with Shashot, otherwise, it will stand inactive in battle. The E5 is also notable for it's unique special attack: the Gran Cross, a powerful beam of energy fired from the cannon in it's chest. The barrel is concealed in the nose and is located where the nose coupling would be. The Gran Cross' activation requires the pilot to be in perfect interlock with Shashot, and consumes a lot of the unit's energy.

The exterior design of the E5 is broadly based on the experimental Fastech 360S train, with a color scheme of "Tokiwa" (常盤) green for the upper body and "Hiun" (飛雲) white for the lower body, separated by a "Hayate" pink stripe.

The E5, when transformed, becomes a humanoid mech, which still keeps it's chest the same the nose of it's shinkansen mode. 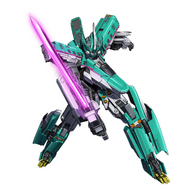 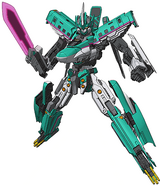