Green and silver with pink linings and gold details

The E5 MkII has access to a large katana known as Turnstile Blade, which, similar to the original E5's Turnstile Sword, can generate an energy cage resembling a station gate to trap enemies in, but only when it is sheathed in a special scabbard known as the Blade Case. The E5 MkII also has a special deathblow known as Dual Gran Cross, which is similar to E5's Gran Cross, but is fired from twin barrels instead of one.

The E5 MkII is also faster and stronger than the original, being able to deal damage to Kairen while the others barely scratched him. Unlike the original, the E5 MkII can operate without Shashot if required (something the original only did during it's final trip underground). The E5 MkII also has an new combination function known as "Over Cross Combination", which works with any standard type Shinkalions.

The exterior design of the E5 is broadly based on the experimental Fastech 360S train, with a colour scheme of "Tokiwa" (常盤) green for the upper body and "Hiun" (飛雲) white for the lower body, separated by a "Hayate" pink stripe.

The E5, when transformed, becomes a humanoid mech, which still keeps it's chest the same the nose of its Shinkansen Mode. Unlike the original, the E5 MkII is a 3 car formation and thus is taller than any standard type Shinkalions. It also has more tints of gold. 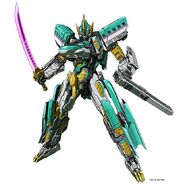 with blade case
Community content is available under CC-BY-SA unless otherwise noted.
Advertisement