One of The Adult Drivers (anime, before Episode 03)
Akita Oga (anime, since Episode 04)

Red and white with gray lining

Shinkalion E6 Komachi is the second Shinkalion of the Shinkansen Ultra Evolution Institute, piloted by Akita Oga replacing one of The Adult Drivers. It first appears in Episode 01.

During the first of the Giant Monsterous Being outbreaks, the E6 was piloted by an Adult Driver, and was one of the primary Shinkalion units utilized, as the E5 unable to be used by the Adult Drivers. After the E5 went into usage being driven by Hayato Hayasugi at the controls, the E6 was the first Shinkalion to have it's driver located by the simulator app, with the resulting candidate, Akita Oga, taking his place as the E6's driver.

The E6 has access to the Railway Crossing Guns, twin rifles based on crossing barriers of a modern railway crossing. The E6 has a set of wheels built into it's feet, letting it speed across the battlefield while it's legs are reserved for jumping. Due to Akita's background of riflery, the E6 excels in ranged combat and is excellent in sniping, which is more accurate with the help of the Namahage Goggles. The Railway Crossing Guns also have a cannon mode, which mount on the E6's shoulders in this form.

The overall styling was overseen by Japanese industrial designer Ken Okuyama, and is intended to evoke images of the Namahage demons and kantō festival lanterns for which Akita Prefecture is famous. The main body colour is "Hiun" (飛雲) white with crimson roof and "arrow silver" bodyside stripe.

The E6, when transformed, becomes a humanoid mech, which still keeps it's chest the same the nose of it's shinkansen mode. 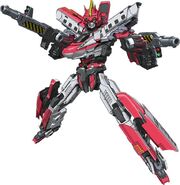 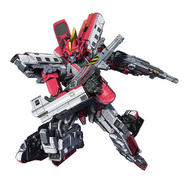