One of The Adult Drivers (anime, before Episode 05)
Tsuranuki Daimonyama (anime, since Episode 05)

Blue and white with gold linings

Shinkalion E7 Kagayaki is the third Shinkalion of the Shinkansen Ultra Evolution Institute, piloted by Tsuranuki Daimonyama replacing one of The Adult Drivers. It first appears in Episode 01.

During the first of the Giant Monsterous Being outbreaks, the E7 was piloted by an Adult Driver, and was one of the primary Shinkalion units utilized, as the E5 unable to be used by the Adult Drivers. After the E5 went into usage being driven by Hayato Hayasugi at the controls, the E7 was the second Shinkalion to have it's driver located by the simulator app, with the resulting candidate, Tsuranuki Daimonyama, taking his place as the E7's driver, though it took some prodding for him to accept the role.

The E7 has access to the Wheel Drill, a large conical handheld drill that pierces essentially all but the hardest of metals and can generate a larger energy construct of itself for greater damage. The E7 is equipped with shovels over it's knuckles for strong punches, while crawler tracks in it's feet let it speed towards the opponent in powerful charge attacks. The E7 was built primarily with power in mind, and as such it is one of the stronger units at the SUEI's disposal.

Based on the earlier E2 series trains, the E7 series trains are designed with a "Japanese" theme inside and out, combining futuristic styling with traditional design elements. Externally, the roof is finished in a "sky blue" colour, and the bodysides are "ivory white" with "copper" and "sky blue" lining. The bodyside logos consist of a number "7" in silver stylized as an arrowhead, and include the lettering "East Japan Railway Company".

The E7, when transformed, becomes a humanoid mech, which still keeps it's chest the same the nose of it's shinkansen mode. 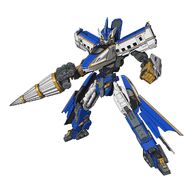 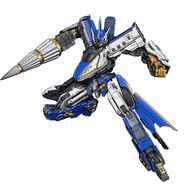