Green and white with purple linings and orange details

The H5 was built as part of the SUEI's intention on expanding the Shinkalion project to a nationwide scale, and it was first deployed to hold off the Rope Spider until Ōmiya Branch's Shinkalions could assist. It ended up finishing off the Giant Monstrous Being after the others failed to make it through the large web. It took E5's place after Hayato was struck by a cold, but unfortunately, the E6 and E7 were caught by Rope Spider II's cables, and Miku was forced to retreat due to motion sickness. With Miku using a little trick to overcome her motion sickness, the H5 destroyed Rope Spider II in a joint attack with the E5. Months later it would yet again taking E5's place, this time to battle against one of the Terrestrial Salamanders along with the rest of Team Ōmiya as E5 left for confronting Black Shinkalion Berserker Mode. Following the Black Shinkalion Ogre's destruction and the Team Shinkalion's temporal dismission, it would remain on standby until Snow Godzilla showed up half a year later.

The H5 has access to the Turnstile Sword, similar to the E5. Much like the E5, the H5 is also an agile runner, with claws for traction and thrusters in the ankles for high jumps. Unlike the E5, the H5 lacks the need for the pilot to be interlock with Shashot, and lacks the Gran Cross final attack. Due to Miku's kendo training, the H5 excels in sword combat, and the Yūbari Heat System makes it better suited for cold climate operations.

The exterior finish of the H5 is similar to the E5, with a color scheme of "Tokiwa" (常盤) green for the upper body and "Hiun" (飛雲) white for the lower body, separated by a "Saika" (彩香) purple stripe intended to evoke images of lilac, lupin, and lavender flowers for which Hokkaido is famous. Bodyside logos are carried on cars 1, 3, 5, 7, and 10.

The H5, when transformed, becomes a humanoid mech, which still keeps its chest the same as the nose of its shinkansen mode. The overall outlook of H5 is similar to E5, with the major difference being the silver ornament on its head which resembles the logo of H5 series Shinkansen, as well as the distinguishing orange color over its torso, which symbolizes its specialized Yūbari Heat System. 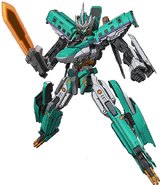 With wings and Turnstile Sword

Official smartphone wallpaper of H5 and its driver

H5 in the anime, with Miku Hatsune as driver
Community content is available under CC-BY-SA unless otherwise noted.
Advertisement