Ultra Evolution Mobile Z Gear is a toy released within the Plarail Z Combine toyline. It is primarily released in Japan. It is based off of the Z Gear, which Shinkalion Z Drivers use to control the shinkalions.

It has a QR Code scanner that can read certain QR codes to store the data of various Zailiners and Shinkalions. There is another mode where you can take data of a Shinkalion, along with up to 2 Zailiners (1 for the arms, one for the legs), and combine them together. In the third mode you can use the base forms of Shinkalion along with their respective Zailiner combos to fight Giant Monstrous Beings. The fourth mode is a minigame where you tap the button once a Giant Monstrous Being icon reach the center threshold to destroy them. However you aren't supposed to hit Smat who sometimes comes through as well.

Another notable function is that it can transform into Smat himself. It has a digital screen that can make various facial expressions. The limbs are also moveable. 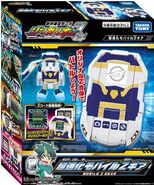